I had been wondering for sometime: can I buy carbon credits to offset my activity? I live in Japan, and go to Europe around once a year. The carbon impact of those trips basically doubles my carbon footprint. 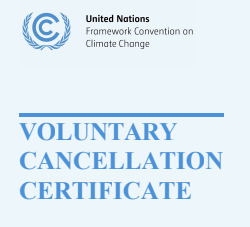 I have once been offered by an airline company to offset my trip by paying some extra to support a tree planting project and happilly contributed. It was so cheap (less than 1% of the plane ticket) that it also made me wonder about the efficiency of the scheme. But this made me think, at that price, it is not a burden for me to offset my whole activity, so why not do it.

Wanting to act locally I first tried to get credits in Japan. But I couldn't find any website where I could do 1 click card payments, it seemed I had to get in touch directly with people in charge of the various projects and the procedure was not clear. So I gave up and used the United Nations platform which was really easy to use and includes a simulator. My electricity provider, Greena is already supposed to sell me 100% renewable energy (which I doubt is possible during demand peaks or cloudy days, even if relying on hydro, they likely rely on the offset scheme as well), so I checked the box on usig 100% renewable energy. Even if your airline company might already be paying for it without you knowing it, I don't really mind paying again just to make sure, and included all my flights. For 2019, I ended up with offsetting 21 tons of CO2 for a bit less than 200 dollars (It could be cheaper depending on the project you choose), for 2021, 13 tons (with the situation, I didn't use any plane and almost no other transport), paid 13 dollars (a tree planting project, these seem to be the most cost efficient).

It's cheap enough for now to do it painlessly if you are not in a difficult financial situation, and really easy to do with the UN platform. The current cheap price seems to be due to a low demand for the credits coupled with a large availability of existing low cost solutions. Of course, I expect that the more the offsets are used, the more the low hanging fruits will have been harvested and that the marginal return on of offset dollars will decrease, increasing the price per ton. Especially, many countries like Japan are expected to enforce ESG rules starting this year. This may drive large corporations to buy offsets in mass, driving prices up. On a side note, it seems that price per ton of CO2 in the Japanese projects is at least 10 times more expensive. I guess cheaper relative costs of living makes it more cash efficient to offset credits in developping countries?