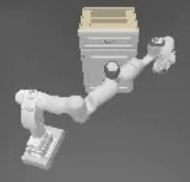 Here is a list of works presented at ICLR 2022 main conference or workshops that I found interesting.

Reinforcement Learning with Sparse Rewards using Guidance from Offline Demonstration A step from Imitation Learning where example trajectories are used for guidance, but learning is still based on reward.

Accelerated Policy Learning with Parallel Differentiable Simulation Differentiable simulation have helped with simple low level control, but not yet with more complex task necessiting many simulation steps. The proposed algorithms, SHAC, only propagates gradient through short horizons, thus obtaining benefits from RL and gradient based methods. They also used a GPU based diffentiable physics simulator allowing for massive parallelism.

A Unified Substrate for Body-Brain Co-evolution Evolves a Neural Cellular Automota to control the growth of a robot as well as the robot itself.

A little taxonomy of open-endedness Potentially interesting when discussing robots in "open-ended" environments.

Fixing Malfunctional Objects With Learned Physical Simulation and Functional Prediction Potential for fixing scanned objects, or as part of an assisted design workflow.